Abstract
The article examines how communication tools became social actors for family members separated due to economic migration and for parenting from abroad. Media and movies became aware of social problem in communication within long distance families, and they are not only witnessing but support the connection within families and reshape themselves. The paper analyses video clips from artistic and political background and legal framework on child protection along with statistics on economic migration. Social
actor attribution of technology is acknowledgment of two-way street in communication. Win-Win strategies in telecommunication and social assistance legislation (must) meet needs of parents working abroad, children left at home, elderly sitting households
and grandchildren.

INTRODUCTION
We are people of words. We write them, we read and listen to them; we wake up and put ourselves to bed with them in mind. A word may be the name of a person, of a feeling, or of a God. Putting something into a word, giving something a name is building a bridge; it is a reaching out gesture, a connection between one’s ‘island’ and the other’s harbour.
When distance is involved, words mean a lot more. Their simple presence is a statement; looking for them is a meaningful act itself. I have been keeping in my mind words from a French magazine article referring to invisible and yet real wire of mobile phones: ‘The more we use mobile phone, the more we lack affection. We want to feel reassured all the time. We are reaching for the mother’s voice. Calling is asking for love. I had called my parents for a long time, even when I knew they wouldn’t answer anymore’ (Rufo 2004).
Economic migration in our globalized world does not abolish parenting and homesickness. Children, parents and grandparents feel less separated due to digital connectivity and to their communication devices – smart phone, laptop, tablet, software, applications etc.

The paper refers to Romania’s situation after country joined the EU in 2007 and how (grand) parenting from abroad is related to new technologies development. Humans have five (traditional) senses, as well we all know – sight, hearing, taste, smell, and touch. When using computer or smart phone to talk to our family members, we cannot embrace them – there is no touch. We cannot sense the others fragrance – no smell. We cannot enjoy comfort food – no taste. But we have two of five: we can see and we can hear. I think it is not bad at all. And science is still young. This leads us to #2S2U Hashtag. Let us make this one the hashtag of long distance!

In this paper I use the notion of ‘social actor’ with meaning given by the Stanford scientist B. J. Fogg: ‘social actor’ along with ‘tool’ and ‘media’ are the three roles computing technology can play, ‘the functional triad’ (Fogg 2003: 23). As a social actor, the technology ‘can be persuasive by rewarding people with positive feedback; modelling a target behavior or attitude; providing social support’ (Ibid.: 25).

In the era of analog telephone when calling on the phone, we had to write down and to keep paper at hand or to memorize numbers. Nowadays with mobile phone agenda, we dial names or statuses. One calls Dad, one does not dial every time each figure. We do not (have to) know by heart the phone number of family members. Bevahior has changed due to functions incorporated in phone’s agenda and memory.

In 2003, B. J. Fogg argued: ‘We have entered an era of persuasive technology, of interactive computing systems designed to change people’s attitudes and behaviors. The earliest signs of persuasive technology appeared in the 1970s […] But it was not until the late 1990s – specifically, the emergence of the Internet – that  Ionescu more than a handful of people began creating persuasive technology’ (Fogg 2003: 1). Regarding ‘social support’ provided by computing technology, this paper would make its statement as many others to come in this generous field.

Both telephone and internet are, in these families, daily basis words aimed to put everyone on the side of a device, in order to feel beloved one, on the other side – through phone calls, short message service, instant messaging, or video connection. A global survey from 2014 indicates that 83 % of users believe that ‘affordable access to the internet should be a basic human right’ (CIGI 2014).

ECONOMIC MIGRATION OF THE ROMANIAN PARENTS
Let’s talk numbers!
One single child missing parents who work far away from home would be enough to draw the whole world’s attention. Meanwhile, 100,000 children waking up every morning in a house without mother and father are living now in the Romanian households. Browsing statistics from different years, institutions, sources and organizations only brings to this core issue: 2 per cent of Romanian children (from government data) and 7.5 % (from NGOs data) have at least one parent working abroad; at least 83,000 children monitored by authorities, up to 400,000 children left at home in extended family informal custody, or simply abandoned in ‘siblings mutual care’.

Meanwhile, one line from video clip ‘All over again’ of Romanian band Voltaj suggests in 2014 that more than 3 million people have left Romania to work in Western Europe (Voltaj Channel on YouTube 2014). One million Romanian mothers and fathers working in Italy have left back home 400,000 kids under the age of eight years. 100,000 children have both their parents away (Dumitrache 2011). 350,000 Romanian children were left home by their parents who worked in Western Europe, in 2008, data available
one year after Romania had joined the EU. 126,000 children had both parents away (Association Alternative Sociale 2008: III). Gone to Work in the EU Mobility of workers in the EU, especially toward the West, is a well-known fact; there are economic, political and social factors – in the country of origin (push factors) and in the country of destination (pull factors) (Eurostat 2015b).

From the ‘first wave’ of few thousands in the early 2000s to more than two million nowadays, the Romanian citizens make their way in the new countries: in 2014 only, more than four thousands received citizenship in Italy, the state where the Romanian women outnumbered men in the group of economic migrants; they are the second largest group of citizens living in another EU Member State (the Romanians make 6.2 per cent of the foreign population in the EU); they send money back home – third place in group of largest surpluses in personal transfers in 2014.
• [EU] received nearly two million migrants of other EU nationalities. The Romanians were the most mobile […]
The EU-27 Member States received 384,000 Romanian citizens, 266,000 Polish citizens and 91,000 Bulgarian citizens (European Commission 2011: 18).
• In Italy and Spain women outnumbered men in the biggest group of immigrants (with Romanian citizenship in the case of Italy, and Moroccan citizenship in the case of
Spain) (European Commission 2011: 19).
• The Turkish citizens make up the biggest group of nonnationals. This group comprises 2.4 million people, or  Ionescu / Keeping Together Long Distance Families 57
7.5 per cent of all foreigners […]. The second biggest group is Romanian citizens living in another EU Member State (6.2 per cent of the total foreign population)’ (European
Commission 2011: 74).
• The outflows of personal transfers in 2014 were highest from France (€9.4 bn), followed by the United Kingdom (€6.8 bn), Italy (€6.5 bn) and Spain (€5.9 bn) […] The highest inflows were recorded in Portugal (€4.8 bn), ahead of Poland (€2.8 bn), the United Kingdom (€2.4 bn), Italy (€2.1 bn) and Romania (€2.0 bn). As a result, the largest surpluses in personal transfers were registered in 2014 in Portugal (+€3.6 bn), Poland (+€2.6 bn) and Romania (+€1.6 bn) (Eurostat News Release 2015).
• Citizens of the EU-28 Member States who acquired citizenship of another Member State amounted to 98.5 thousand persons, accounting for 10 per cent of the total. In absolute terms, the main groups of EU-28 citizens acquiring citizenship of another EU-28 Member State were Romanians becoming citizens of Hungary (7 thousand) or Italy (4.4 thousand) (European Commission 2015).

Who Loves You? Mommy Loves You / Te Iubește Mama/
La Mamma Ti Vuole Bene
‘La mamma ti vuole bene’ project was created along with Romanian local public libraries in order to facilitate audio-video communication via Skype™ software1 between children from Romania and their parents from Italy. The purpose is to prevent and diminish social and emotional problems of children left back in Romania, to offer support for children and their family, and to improve school attendance. Silvia Dumitrache, coordinator and initiator of the project, wrote on her site:
I have found out that in Northern Italy only, there are more than 130,000 women over 40 who left back in Romania their children with fathers or other relatives. There are as well children left behind who can connect with their mother extremely rare and difficult […] A Romanian child whose mother works in Italy can connect free with her via Skype™ software, by Biblionet Program, in any public library from his / her village or town. 2 In Italy the network of libraries involved in project is developing, a first example is Biblioteca Gallaratese from Milan, by ‘Face to face’ @Biblioteca finestra sul mondo program. 3 ‘La mamma ti vuole bene’ was initiated by Association of Romanian Women from Italy – ADRI in partnership with National Association of Librarians and Public Libraries from Romania – ANBPR, and Irex Fundation Romania. 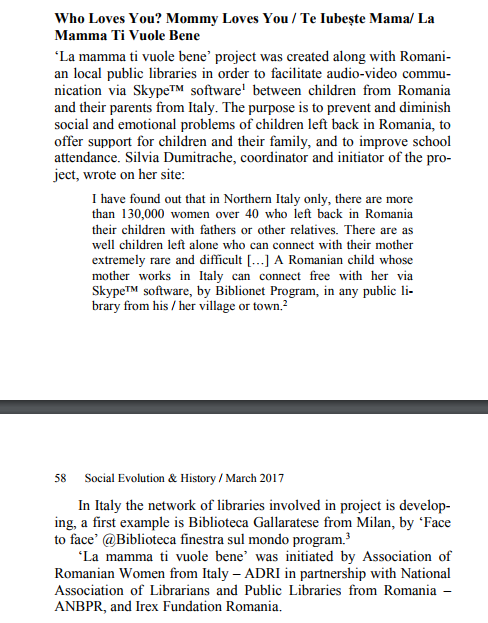 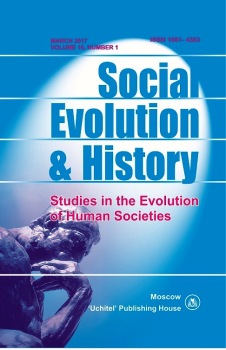 The article examines how communication tools became social actors for family members separated due to economic migra-tion and for parenting from abroad. Media and movies became aware of social problem in communication within long dis-tance families, and they are not only witnessing but support the connection within families and reshape themselves. The paper analyses video clips from artistic and political background and legal framework on child protection along with statistics on economic migration. Social actor attribution of technology is acknowledgment of two-way street in communication. Win-Win strategies in telecommunication and social assistance legislation (must) meet needs of parents working abroad, children left behind, elderly sitting households and grandchildren.

Honored to have contributed to this study Silvia Dumitrache & Proiectul „Te iubeste mama!”